Joined May 28, 2009
·
4,197 Posts
Well after a very busy Christmas/new year period, my focus goes back to the F56. I have plenty of tweaks on the shelf such as rear wiper delete, new gear knob, fresh beltline etc, I'm just waiting on some better weather to get out there.

The Next Mod
But on much bigger news and something I hadn't planned for so soon was the car has now been remapped. Yesterday I received a phone call from Jason, over at Millsy's autos. Nick who some of you may know from his Manic days, now works over at Peron Automotive who are big on Fords and plenty of other marques. Nick was mapping my old red clubby for its new owner and offered me the chance to buy their new map for my F56. Having been involved in the development of the original maps for the F56 under the Manic name, Nick was one tuner I was waiting to pop back up following their closure. I had lived with the map on my old F56 S for a couple of years with zero issues so was confident it what he had to offer. My old S was running 295bhp and 460nm of torque and was spot on for where I would want this JCW to be. Being a JCW this new map should get me passed the 300BHP mark no problem, once its been on a dyno I will share the results.

I had a great chat with Nick around the mapping for both the 2nd and 3rd gen cars, they have been working hard in the background to build on what they learnt previously and they will soon be announcing Peron's mapping for the both gens. The big differences for me during the conversation with Nick was if felt like the the pops/bangs were less of a feature in the maps, they are still there and can be tweaked but were not a key selling point. I find with remaps, some owners spend more time worrying about what flames and bangs they can get from a map rather than the performance side. Each to their own I suppose, I love pops and flames myself as I am a big child but that for me they are a bi-product of your exhaust set up rather than a key feature of a map, again my personal opinion. We spent plenty of time talking about the 2nd gens mapping too, again they have learnt from past experience, so expect some good results on this front too. I'm sure Peron will answer any questions once they have announced this new service, Nick mentioned hopefully by the end of Feb they should have more news on their social media etc.

Time to Map It
So having arrived at Millsy's Autos, Nick was just finishing up with my old clubby. Then it was my cars turn, we pulled it inside as it was freezing and Nick worked his magic via the OBD port. 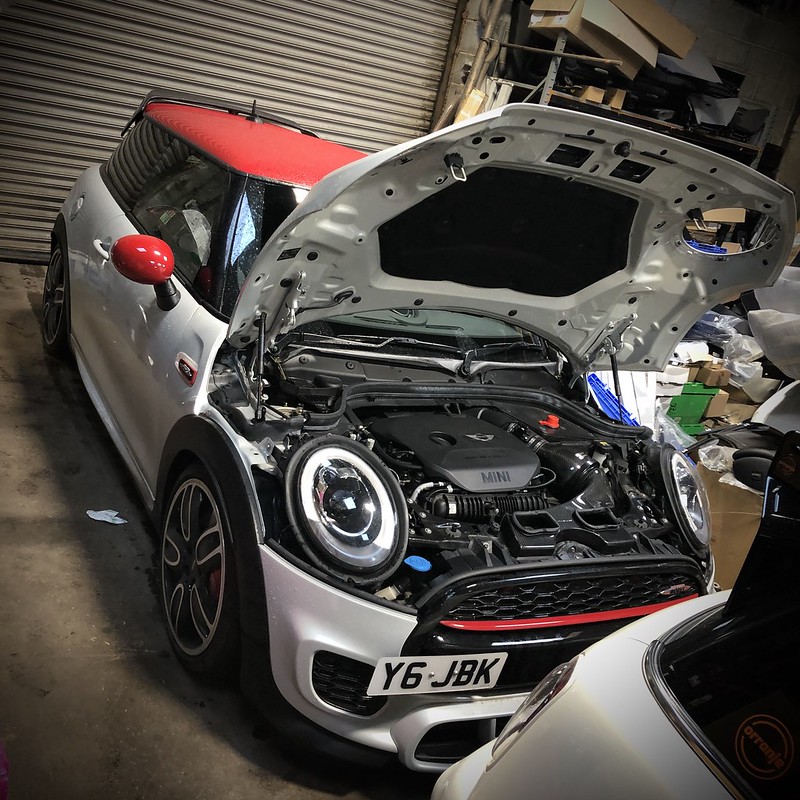 Once check it over and the car was warm, off he went for a test drive and all was spot on. So after having a good gossip with Jason, I warmed the car up again and set off home to feel the difference. Now unlike the S, the JCW out the box does feel reasonably quick for a Mini, however the remap has done exactly as expected and it now pulls like a freight train. My test drive home was limited due to this weather we currently have and rock hard run flat tyres, so I am now sat here planning which wheel/tyre combo to order to ensure this new power can make it to the ground. First impressions I am really pleased, with the limited grip on the wet roads, my bum dyno says it felt at least as quick as my old S, so I am now interested to get it on a dyno and see the actual numbers for comparison, because there should be more power with the differences on a JCW such as the turbo etc. I can happily say theres now a bucket load more power and torque.

Here is a link to Peron's site if you haven't heard about them, they are based between Sheffield and Barnsley, however for those that don't want to travel that far north, it looks like Millsy's Autos may be able to offer these maps in the future, so again keep an eye out on their social media too:

Big thanks again to Jason and Nick for sorting the car yesterday, now time for some stickier tyres.

Also for anyone with 30 mins to kill and who may be interested, one of my latest videos over on youtube covers my car history all the way up to the F56.