Been on here for a little while now, got a few jobs done to the Hatch with a few more planned in coming weeks. So thought I'd post up a thread...

Bought the car in December 2015 after much consideration. I Knew what I wanted, just needed to find it...

I trained as a BMW/MINI Technician so all the work is of course being done by myself. After 4years I decided that I liked the idea of sales and moved over to sales.

This delayed my purchase as I had a company car. and still do.. Yep. I have two MINI's.

Working at MINI meant I had a number of sources to search through to find the right car.
Ended up buying from a Ford dealership of all places.

and most importantly had some of its Manufactures warranty left.. in case a few things need replacing! If you catch my drift.

The car had a red roof and mirrors from factory. This didn't look too smart and needed the black roof and mirrors to match the wheels and ABC pillars personally.
So with a quick conversation with the Bodyshop they managed to get this done for me before taking it home... Result!

Pictures from the add: 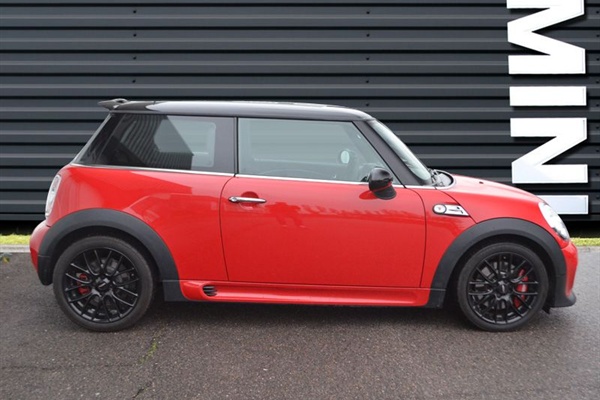 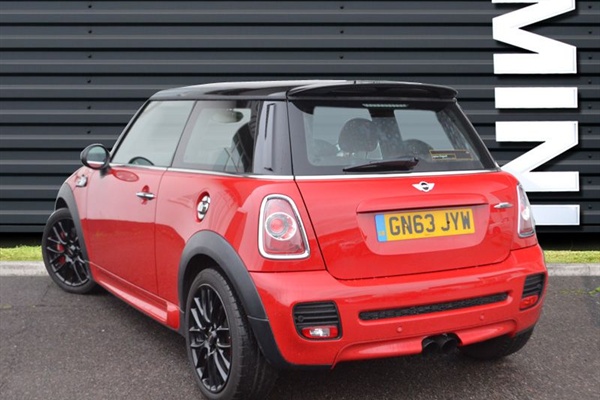 First up was a good clean and fitting of the Evolve decat I bought before I even had the car!
As I had this before the car I had time and decided to heatwrap it, so that's done and of course keeping those engine bay temperatures to a minimum. (Click the Video below, should work, only a little one after fitting) 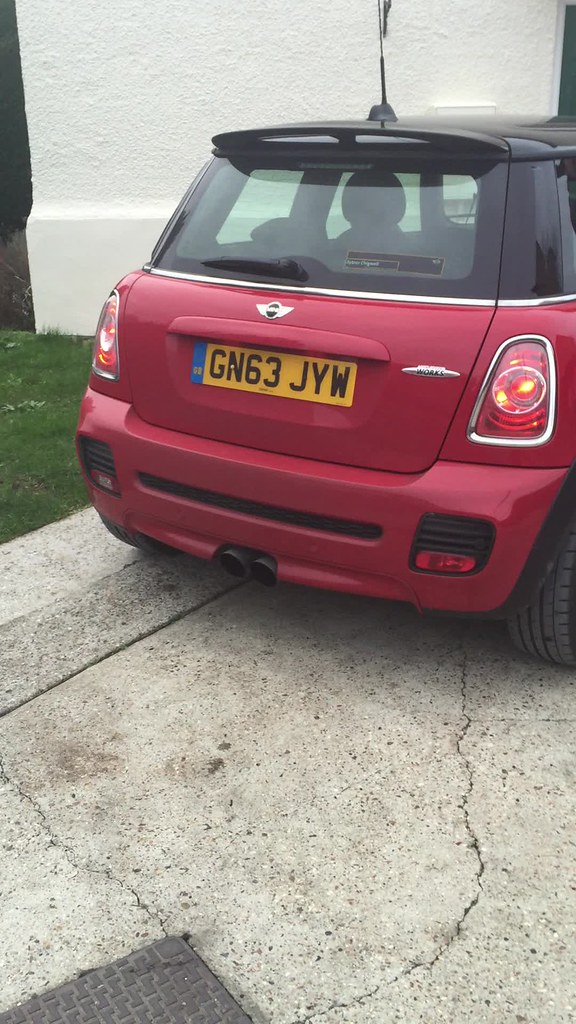 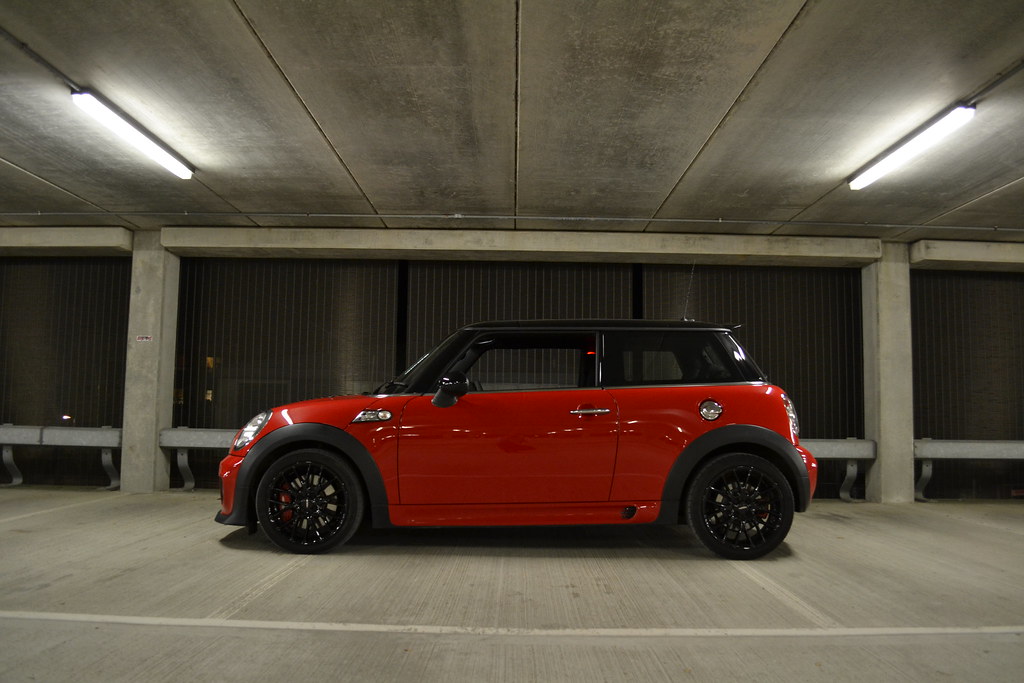 As I'm sure you all know, they sound much better on the move. Haven't got any intentions of changing the exhaust as I like the factory look of the JCW system and to be honest, money is better spent in other areas.


I then bought a K&N Typhoon Cold air feed which other than sounding great, had a nice effect on the power band. Seems to be much smoother surge of power. 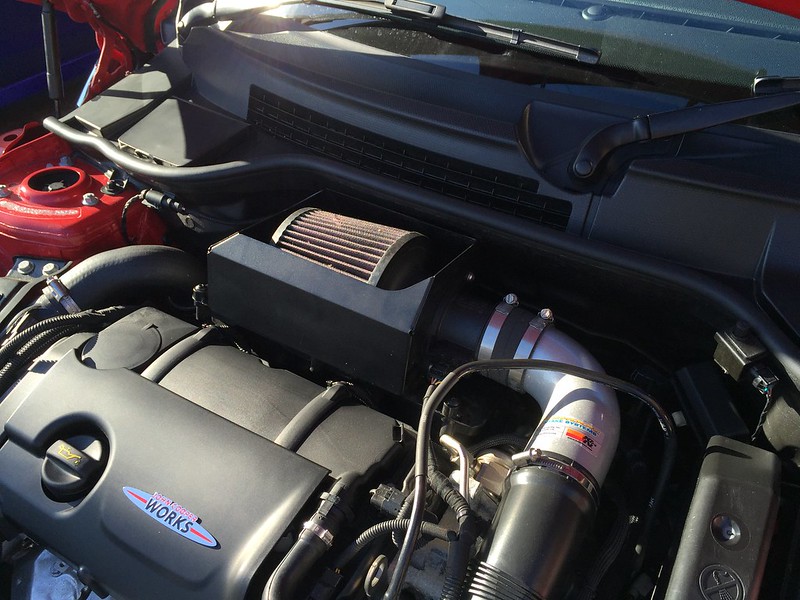 Looking at your Flickr, how does the R56 JCW compare to your F56 Cooper S? (Assuming it's the leccy blue 16 plate)

Matt Heard said:
This is lovely mate!
Click to expand...

Thanks Matt! Found you on Insta the other week, must say I do like the Corbeau seats!!

Taylor_JCW said:
Thanks Matt! Found you on Insta the other week, must say I do like the Corbeau seats!!
Click to expand...

What's your user matey? Yeah I do love them, ideal for what I use the car for and fit well in the R56

Looking at your Flickr, how does the R56 JCW compare to your F56 Cooper S? (Assuming it's the leccy blue 16 plate)
Click to expand...

Yeah that's the one.. Had a F56 JCW for a little while too.
Power wise, the R56 feels much faster. The F56 is so much more refined and almost too electronic when it comes to having a blast. There are so many driver assists on the F series.
One that I do like though is that on the downshift it rev matches for you.. Takes the fun from driving a bit but its good if your being lazy!

Matt Heard said:
What's your user matey? Yeah I do love them, ideal for what I use the car for and fit well in the R56
Click to expand...

Something I might consider later on.. Although i'd lose the heated seats. :/ Cant be doing that..ha

Something I might consider later on.. Although i'd lose the heated seats. :/ Cant be doing that..ha
Click to expand...

Ahhh there's no need for them! The material is a lot warmer than leather in the winter months!

Completed a 3stage Paint correction the car last week.. when I say 'completed' I still have the front end to do as I ran out of time.

Sealed what I have done already with some FussoWax. Brillinat stuff... used it on previous cars and it lasts ages too. 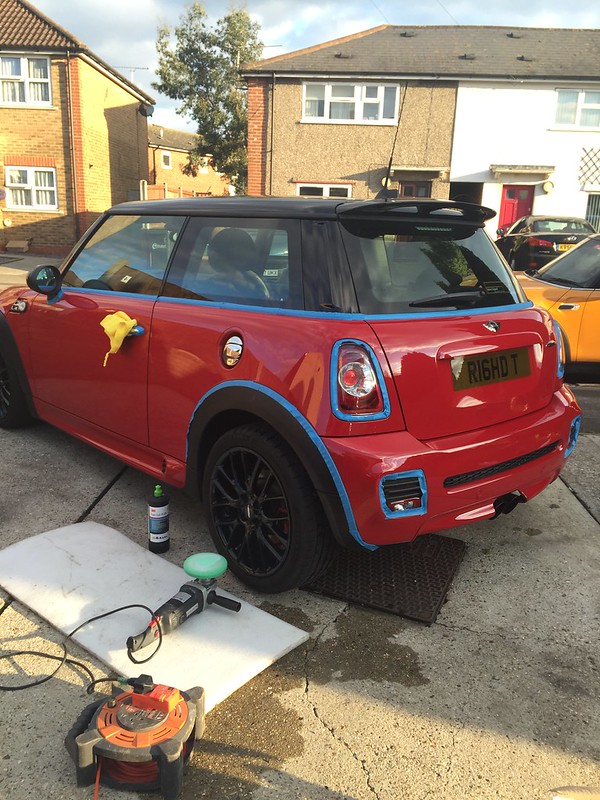 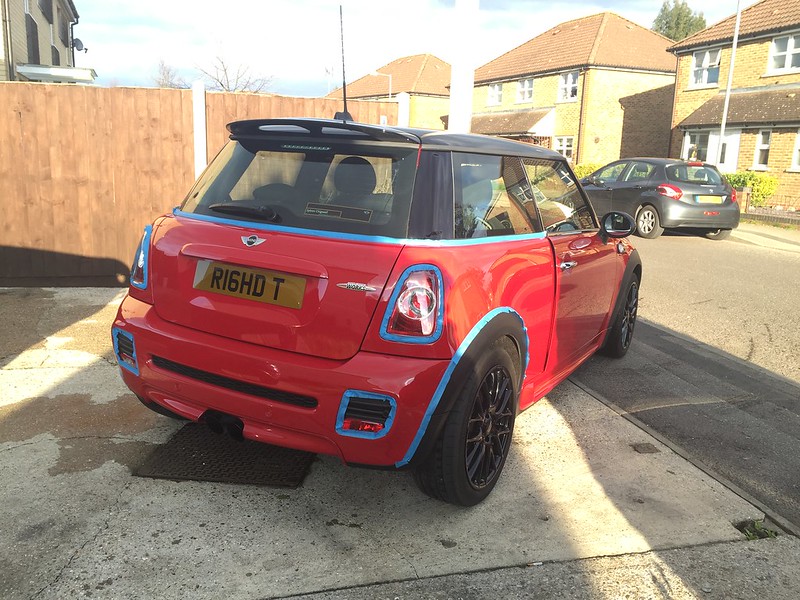 Me and a group of mates have a Road trip booked for this year..
10 Nights through France, Switzerland, Italy, Slovenia, Austria, Germany and then home.
The Main reason for it being the show called Worthersee in Austria, most of my mates drive VAG stuff so were heading there via some of europes best roads.

I'm hoping the MINI will come into its own on some of the mountain roads and passes.
Need a few bits done before I go to get the most out of it..

First I need to loose these run flats, So I've bought some Michelin Pilot Super Sports. 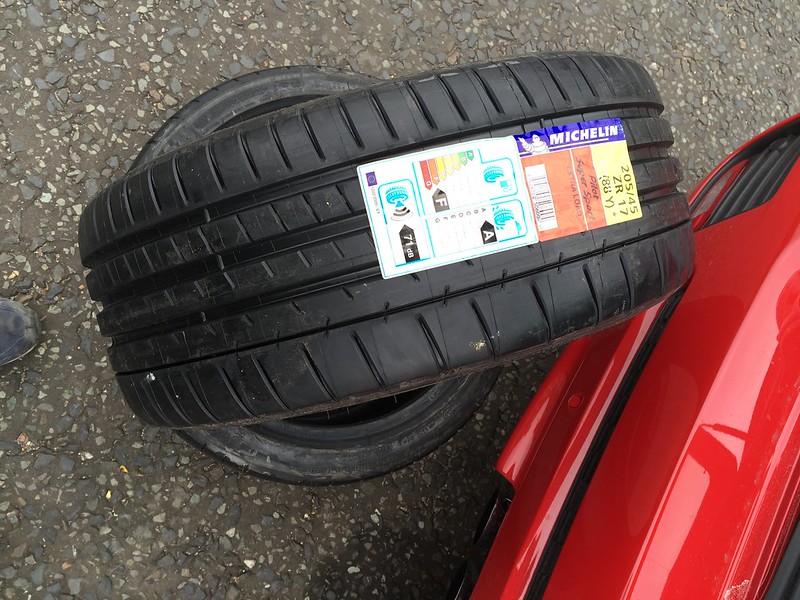 I've just ordered an Airtec FMIC and booked the car in at 1320 for a Manic Map on April 14th. Hopefully going to get a print out before and after so there will be videos etc to follow!

You'll be happy after the manic map as well :thumbup1:

I forgot to mention that I have fitted a GP2 front undertray. This was fitted at the same time as the Decat, Not got any pictures but I will be sure to get some when the front end comes off for fitting of the FMIC.
On the list for after the holiday is the GP2 diffuser, will grab this from work as I should be able to get a nice little discount too!

On the other hand!
Free Mods are good mods.

I've always thought the audio on the Non HK R56's is absolutely Sh*t. Preparing myself for an audio upgrade of speakers and an OEM looking amplifier install I started researching some audio threads.
Came across a few reviews of the Channel swap. People saying they got a greater benefit from this than speaker upgrades etc.
So as the NorthAmericanMotoring thread was old and the pictures weren't working I used my initiative and cracked on.. 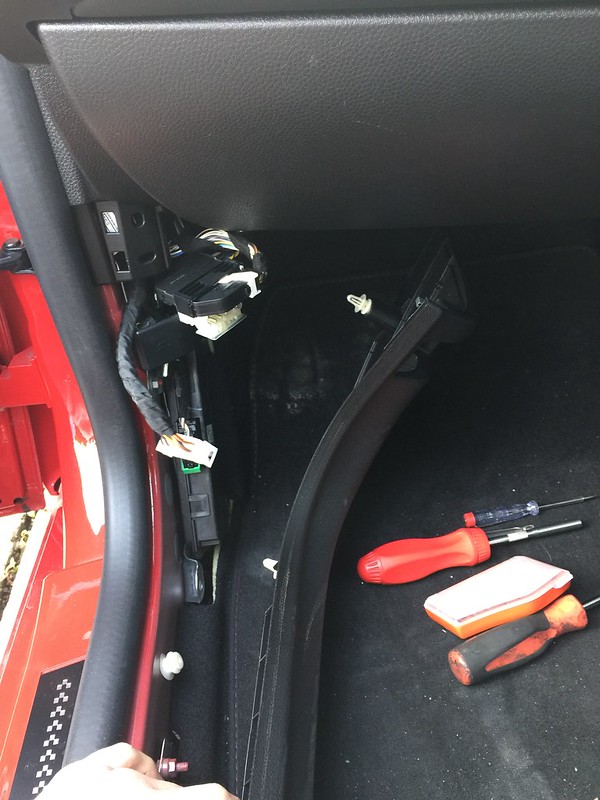 Just a case of swapping 8 pins on a connector in the passenger footwell. If you haven't done so, do it!

MINI from factory send all the Low tone and bass to the 4 component speakers upfront and all the higher pitched vocals etc to the 6x9's in the rear. Doesn't make sense and sounds pants.

Once switched it sounds a fraction from a HK system personally. (Ofcourse HK is still better) 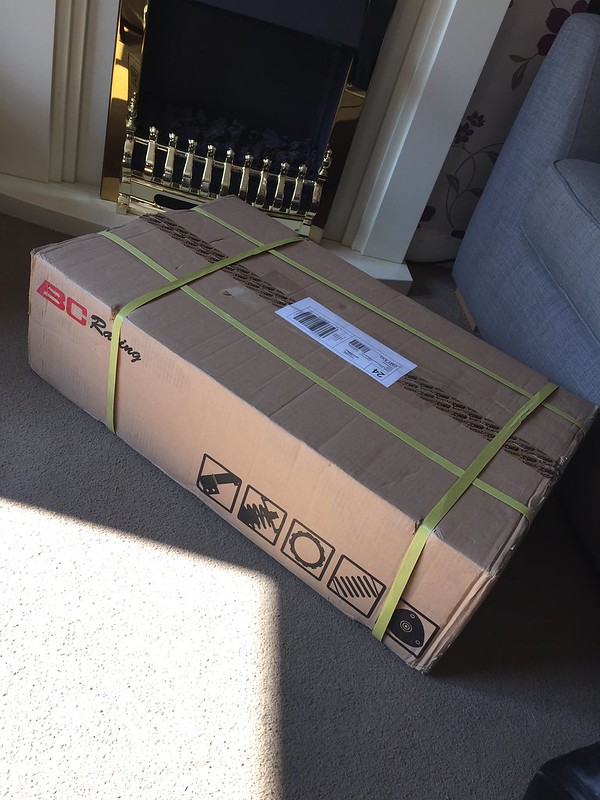 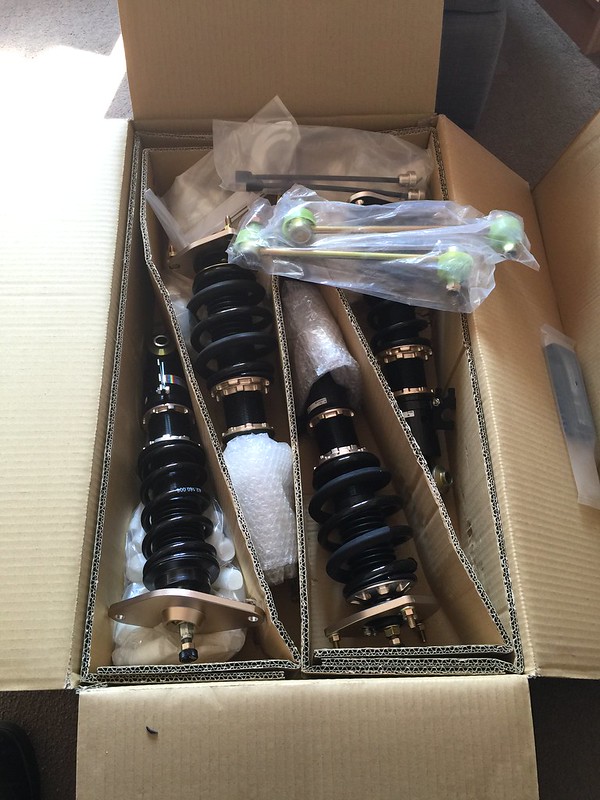 Was looking to order a set of Meister R's but couldn't find anywhere that had them in stock, spoke to Meister R themselves and was advised on a 12week wait.
These were first choice as ive had them before on previous cars and been very impressed.

Second choice were the BC's. First impressions are a great quality product. Nice surprise to find new Drop links in the box too, saves having to buy some shortened or even adjustable ones.

These will be going on the car Easter weekend as well as a few other bits.

Managed to squeeze some time in over the Easter weekend to get some jobs done on the car. Whilst it was pissing down with rain must I add!

Plans were to get the coilovers on and adjusted, New front tyres, Fit Airtec FMIC and lastly get the GP2 spoiler on.

I ended up becoming ill over the weekend too and managed to get the coilovers on and that is all.
I feel like I've let myself down.ha 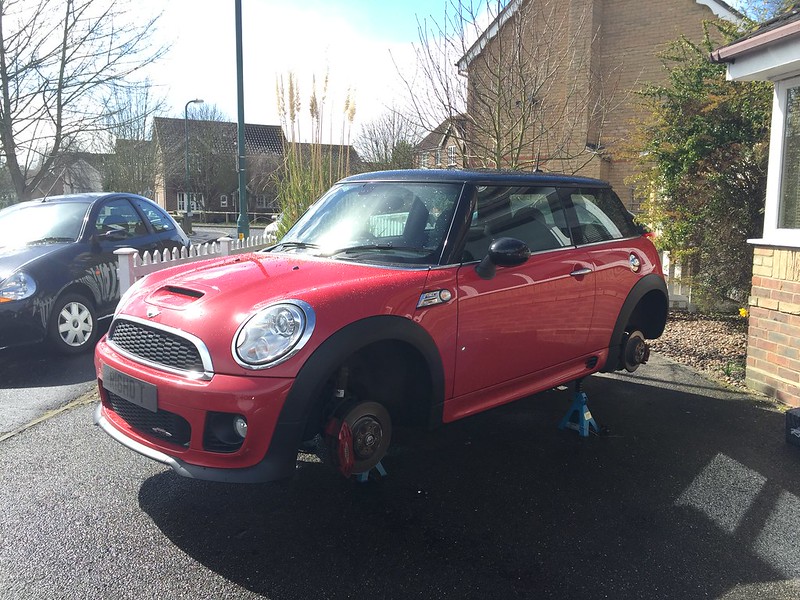 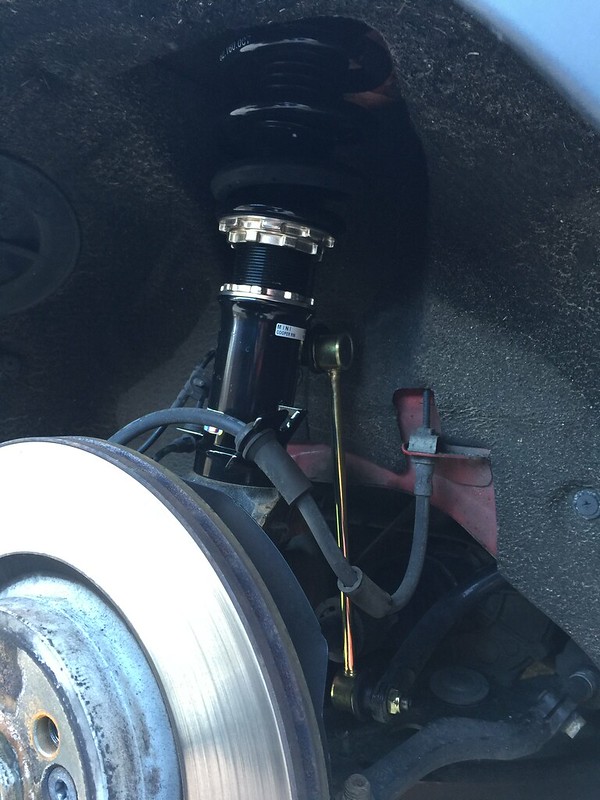 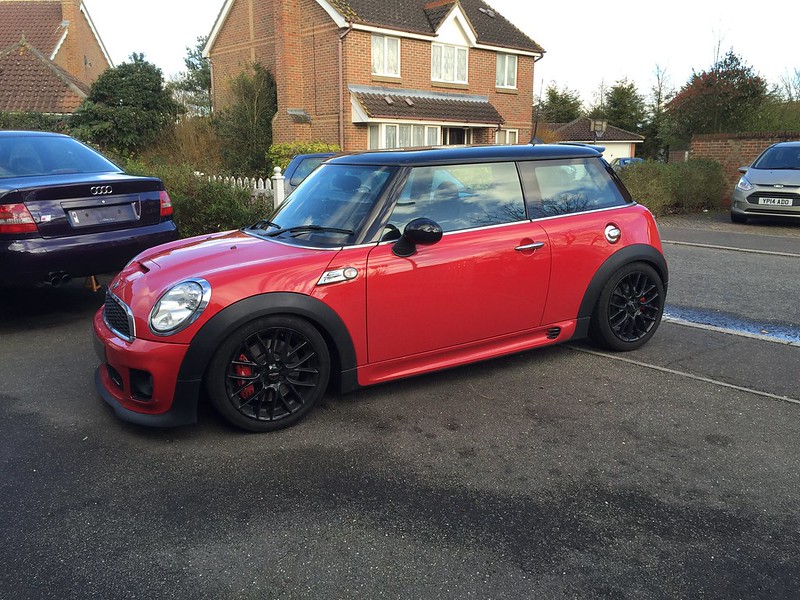 I'm really happy with the outcome.. BC's have a great quality feel behind them, Ride quality is very similar to that of HSD and Meister which I've had on previous cars.

One thing that I'm not very happy with is the knocking noise I have coming from the rear over bumps in the road. Even coming off my drive which is a lowered curb, they knock.
Read a few forums of BC's on other cars and people mention how they have had similar issues and cured it by increasing the spring preload to 5mm.
so I did this all round, no change.
Checked all bolts, mating surfaces etc.
Has anyone else had these issues and know of a cure?

Joined Sep 18, 2011
·
2,883 Posts
I pre loaded all of mine by the width of one of the C spanners and I haven't ever had any knocking, mine is an R53 though.
I did mine before fitting (there is a guide on YouTube) and then about a month later once they had settled.

Spidermonkey said:
I pre loaded all of mine by the width of one of the C spanners and I haven't ever had any knocking, mine is an R53 though.
I did mine before fitting (there is a guide on YouTube) and then about a month later once they had settled.
Click to expand...

Thanks for the feedback. I will give them some more pre load, it cant hurt!
I was hoping that once they have settled they would quieten down a bit but only time will tell..

On my day off this week i'm going to strip the rears out and just double check the top nut below the damping adjustment is tight. People say to tighten it more than factory and it stops the knocking.. we'll see!
This is the only thing people say to check that I haven't.

Sent from my iPhone using Tapatalk