Just a couple of notes before I start,
I don’t do this for a living, I did this for a friend, hell I didn’t even charge him! These days I don’t have the time to other peoples cars, that’s why im posting the DIY, so you can get a feel for it before setting off into the unknown.
If in doubt of your abilities, DON’T, im not responsible for you making a pigs ear of it.

Ok, what you need:
Pair of tweezers
Soldering iron (fine tip)
Solder station (holds the iron with a sponge in it)
Solder
Solder vacuum pump
Torx drivers
Screwdrivers
Skinny pliers
Plastic tools for prising the dash apart to minimise scratches etc
LEDS, for this you need 2 types, the bigger ones are PLCC-2 3528, the smaller 0805
A steady hand!

Remove the 2 torx screws behind the rev counter
The plug is hidden inside the steering column so the easiest way to remove it is to undo the Philips screws on the back of the rev counter and unplug it from inside.

Now unclip the various parts
Front cover
Clear lens
Then the black ring
Then the needle (turn it anticlockwise against its stop, continue turning while applying upward pressure and it will pop off)
Then the white plastic and dial
Then the display

the display clips in here, to open the clip slide the dark plastic downwards and the ribbon cable will come out, to refit, slide the ribbon cable in and the push the dark section back into place.
Also in the picture is the socket that the wiring loom plugs into

now turn the board over to see the LEDs

the backlight has 4 leds, look closely you can see the ones to change, already swapped at this stage they have a yellowish centre.
The needle has 3, around the needle, kind of obvious….

the backlights for the display have 12, there are 5 more LEDs but I don’t recommend changing these, they are for you service warnings etc, if you do decide to change these they are PLCC-4 3528 type. (4 connections as they are bi-colour), all the LEDs polarities are labelled on the board, look closely at an LED, one corner has a cutout, this is the cathode (kathode in german), labelled K on the board, get it wrong it wont light. here are the ones for the displays removed.

once you have changed the LEDs reassemble things in the reverse order, making sure the needles is correctly aligned.

First remove the unit from the car, remove all of this section. 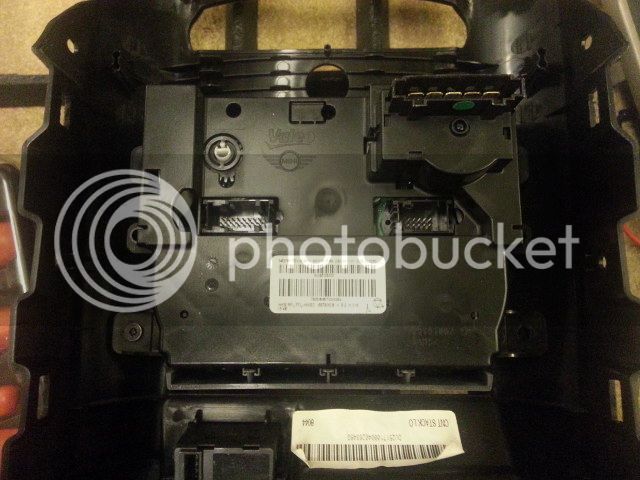 then remove the heater controls so you end up with this

now you need to remove this piece, you just push it off, its quite a tight fit

once the above trim is removed you can access all the clips that hold the back on the controls, carefully unclip them and remove the rear cover

you can now access the boards and unclip them

this is the lower board with the electric window switches etc, there are 5 leds here, there will be 7 if you have heated seats, type 3528, the polarity isn’t labelled on the board so make the board with a sharpie before you remove any, look carefully at the leds and you will see one end has a cut corner, mark this end on the board with a letter K, this means cathode, when fitting new leds make sure the corner matches or it will not light!

now unclip the board and turn it over, there are 17 leds on here, 5 are of a different design to the 3528 leds, you can simply mount a 3528 on its side to do these.
If you have the electronic climate control there will be slight difference, but the principle is the same, again the polarity is not marked, mark before taking off any leds.

Look on the back and take out 2 philips screws, they are down the holes to the left/right of the silver screws shown here

unclip this ribbon cable, a similar design to the previous clip mentioned, flip the darker section and pull the cable out.

now change the 0805 leds, a couple under the volume control as well.
If you look closely at a 0805 it will have a green dot, this denotes its polarity, if you look at the diode symbol on the board it an arrow pointing to a line, the dot goes to the end the arrow is pointing. (not a technical explanation for those with no electronics experience). 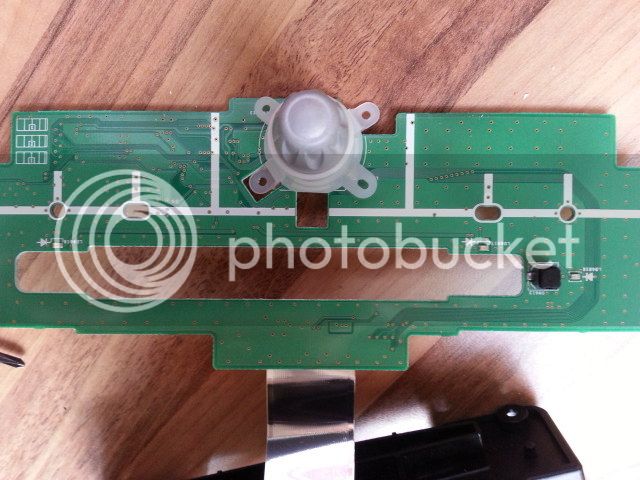 you can just about make out the dot here, (so about the picture quality, my internet speed is so slow it would take an age to upload hi res images)

in the centre of the next picture you can see a small rectangular clip, pushing the clips allows you to detach the two sections.

now unclip the back, 6 clips hold it on

unclip the lcd display, its fragile so be careful.

also holding the display in place are these clips, bend them straight, (bend them back on reassembly)

depending on what colour scheme you are going for you might need to fit a light filter, I use frosted stage lighting filters, you can double them up to make them thicker and reduce brightness of the LEDs.
Remove the metal casing from the display, inside is an orange filter, cut your filter to the same size, I was using red leds so a filter wasn’t needed (its close on the EM spectrum to red). If using blue leds it would look wrong, blue light passing through orange filter = crap!
The filter sits between the white plastic and the screen (no picture oops)

back to the LEDs, on this board there are 30 leds, the ones behind the display are a different size, but you can use 0805 LEDs for these. On this board polarity is marked so follow the same rules mentioned above to fit new ones, NOTE, these smaller leds can be a pita to remove, be careful of damaging the board.

once done you can refit the display

slowly prise off the rotary control, there are 10x 0805 LEDs to change in here, replace using same method.

doing the CD is a fiddly job, take you time, take photos along the way for reference, take care when reassembling.

First remove the front lens, press the clear clips to release. Then the black ring, then the needle (using the same method as for the rev counter)

now unclip the board,
there are 12x 0805 LEDs for the fuel gauge (14 if you count the red “fuel low” indicators) I recommend leaving the 2 red ones, change the 10 in an arc (not the 2 innermost ones) and change the 2 for the fuel pump symbol

there are 4x 3528 for the needle, and 6x 3528 for the backlight (not the ones in the black square boxes, these are warning lights and best left)

To remove, pull on the casing and it comes away, then 2 torx screws and the module can be unplugged fom the car.
Remove the board and you will see this, the ones to change are the 5 in a row, the others are warning light and I would recommend leaving then alone (PLCC-4s again), THE POLARITY IS NOT MARKED ON THIS BOARD, using a sharpie or similar mark the board at the end of the LED, a simple dot will do, mark the end with the cut-out on the LED.

once all the modules are reassembled put them back in the car and enjoy your uniqueness.

Joined Jan 5, 2013
·
671 Posts
i left stu`s house before dark so dont have any pics of everything finished, will post when i get them

i would recommend you only change the ones ringed in the picture, these are plcc2, meaning two connections on the led, some on there are plcc4, these are bi-colour leds and much harder to fit.

they are all 3528 that i used in the aircon too

Joined Jan 5, 2013
·
671 Posts
got the r56 leds done today, too early atm for decent pics, and i need to rewrite the diy so bear with me, check above later for the full how to.
i took just over 4 hours to complete, and this is my first real shot at it, could be done in 3 if i had the relevent info available as i didnt know what was inside the cd player.

i read si (essential mini) has ceased doing this due to it taking too long etc, so really the only way is diy. once the diy is up if you have any questions feel free to message me.

for some unknown reason ive forgotten to do the rotary control under the cd. and the displays are currently red, they will be going white soon.

Joined Nov 4, 2012
·
3,304 Posts
Very nice write up mate. Anyway to change the display screens from being Orange to another colour? Or are they preset?

Joined Jan 5, 2013
·
671 Posts
the lcd displays in post 9 are actually a vivid red in the flesh as are the needles, the camera doesnt show it very well.
they will be going white in the near future
W

1. Any idea how bright the original rev dash LEDs are, in terms of (milli)Candela? I'm happy with the original brightness and don't want to make them too bright or worse, have the LEDs not light up at all because of voltage being too low (although I could probably change the resistors, but let's not go there ).

2. On the rev dash "plate", it looks like the numbers have either red paint or red filters behind them. If so, which is it? If it's paint, what's the best way to get rid of it? Then again, what's the best way to replace the paint/filter to match the new LEDs? (I saw another thread with suggestions, but those were for the R53. Let's do all R56 specific stuff in this thread to help others find answers in one thread. )

3. Is the rev needle painted? If so, how to remove the paint?

I also wonder if multi-colored rev dash would look nice... Any experience/ideas? Maybe only the numbers, like 0-1 green, 2-4 blue, 5-8 red, or 0-4 blue, 5-8 red. From the pics I'd say the LEDs are positioned in a way that might allow this. Maybe have to 3D-print barriers inside to prevent different colors mixing up. Might be possible to make the needle change color with the numbers too, but then again, might be impossible to get them to change at the same time. We'll see once I get it opened up.
1 - 14 of 14 Posts
Join the discussion
Continue with Facebook
Continue with Google
or sign up with email
About this Discussion
13 Replies
5 Participants
Last post:
Stigi 2 mo ago
MiniTorque.com
We’re a forum community dedicated to the MINI Cooper, Cooper S and Clubman. Come join the discussion on performance modifications, accessories, MINI news, maintenance and more!
Full Forum Listing
Explore Our Forums
The Projects MINI Parts For Sale MINI Chat The Projects Engine & Drivetrain
Recommended Communities