big jim said:
Why do these appear when I’m totally brassic!!
Click to expand...

Amen, can't be doing wheels brakes and suspension in one month haha

2003 cooper S 218bhp
Joined Jul 28, 2019
·
314 Posts
I’ve been trying to do some research on these shocks and I can’t find a Koni V2 only the KW V2 which look to be the exact same spec with adjustable damping etc, are these actually KWs?

Also would you be willing to swap one of my kids for them, the smaller of the 2 is just the right size to climb up a chimney to sweep it?

big jim said:
I’ve been trying to do some research on these shocks and I can’t find a Koni V2 only the KW V2 which look to be the exact same spec with adjustable damping etc, are these actually KWs?

Also would you be willing to swap one of my kids for them, the smaller of the 2 is just the right size to climb up a chimney to sweep it?
Click to expand...

I bought them advertised as "Koni v2" . Yes they look exactly like the KW v2's...have all the German TUV certs for them, but in German!
Have attached the top page, as can be seen at the top of the page "Koni Deutschland" I think the person I purchased them from thought the same as you...apologies, should have just listed as Koni.

Regardless, they are good!

Swap for kids?? Sorry bud, have two and thats enough! Infact, after the second one , I went straight to the doctor and got the snip! Absolutely the best decision in life.. .no more worries.. and for many years, my email address was "[email protected]" I got fed up of explaining it..but was certainly a icebreaker when meeting the other sex.

big jim said:
I’ve been trying to do some research on these shocks and I can’t find a Koni V2 only the KW V2 which look to be the exact same spec with adjustable damping etc, are these actually KWs?
Click to expand...

No such thing as Koni V2's but just Konis for the mini. They are very good dampers, @Pobsey ran his for about 10 years with no complaints.

KW's are the only ones who label theirs V1, V2, V3. The Eibach coilovers are KW V1's but with Eibach springs.

lordf said:
No such thing as Koni V2's but just Konis for the mini. They are very good dampers, @Pobsey ran his for about 10 years with no complaints.
Click to expand...

Thanks for the above, have a set of KW V2's on my Lupo, these were advertised as "v2",... obviously not right

Ok, now we're sure, have changed the heading on the thread

Just need to sell them now!

lordf said:
No such thing as Koni V2's but just Konis for the mini. They are very good dampers, @Pobsey ran his for about 10 years with no complaints.

KW's are the only ones who label theirs V1, V2, V3. The Eibach coilovers are KW V1's but with Eibach springs.
Click to expand...

I liked them, rode really nice

Alski said:
Would help if you said which mini also, I’m assuming r53 ?
Click to expand...

Not doing well with listing these...yes for R53

Joined 3 mo ago
·
56 Posts
Still available...seems to a common disease nowadays where people say they are going to buy an item, " tell me when its all packed up, will pay and arrange collection".. well, thats what I did and this morning he messages to say, oh, I've changed my mind!
So, open to offers.... 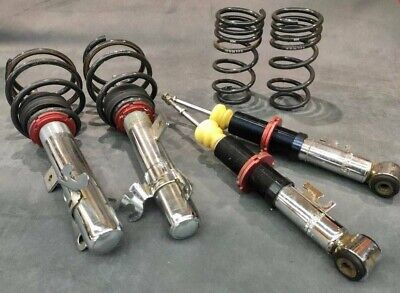 Koni coilovers with adjustable damping. I bought these to put on the R53, but change of circumstances, sold it, so these are no longer required. Also have a GRS Motorsport Intercooler listed. Advertised on other sites too.
www.ebay.co.uk

Joined 3 mo ago
·
56 Posts
Oh well sold, surprised at how long it took to sell them...advertised here, on two FB R53 pages...nada, in the end ebay, fees are high, it was the last option and it worked. Sure something else will come along for you!

Needed a workhorse, got this for now..1.9tdi...miss the 53, but can actually carry more than a shopping bag now.

1.9tdi Sport 130 5 speed AWX Level 3 remap, brilliant car that I've had now for 14 years, I never keep stuff this long, it just works so well, looks great despite a couple of battle scars, and has the Symphony 2 stereo which makes it a lot nicer over distance ;O)

you can't buy new diesel cars like this, DPF free, and large tanks that give up to 850 miles maybe more. Plus it's one of the quietest derv motors imo. Also very tuneable.

Joined 3 mo ago
·
56 Posts
This is my third Avant...RS2..beast, two 80 1.9 Avants, one that was a perfect copy of the RS2...and now this. I love them and as been said, are bullet proof. This is at 212k, but drives great, last owner was a mechanic, so well looked after...happy days
Tuneable, yes, but having tuned every car I've owned, at the moment, happy as is...surprisingly, doesnt feel slow at all.
Pray tell, whats does a level 3 remap consist of?

Joined Jan 21, 2015
·
4,856 Posts
just mapping it three times because I wanted a bit more haha, my mate use to own QR Sport who offered the service, and he was happy to keep pulling the ECU and trying stuff out of all the files they had, I think I was just lucky this car didn't throw out 'too much' soot haha, it does a bit, especially if it's been used a lot pottering about but soon cleans up, it used to drive straight to 140 which for the car it is was funny enough, not super quick but little in the way of a delay, it is only an estate car at the end of the day ;O) He'd done a Passat with this map the day prior and said it was barely driveable but it worked well on mine. Far from slow, although could probably do with some system cleaning to restore a bit it's lost over time, rarely used now so it gets forgotten about, I keep it because I like it. Nothing special about it compared to what's about now perhaps, it just works well.

mine is on 163k now I think, Mrs borrowed it twice putting 30k on each time. I bought it with 72k on it, I just really liked the colour, reminded me of the old Oak Green Golf GTI's. Nearly sold it a few weeks ago, someone asked about it, but I said too low a number and knew it, later told him I was hanging on to it for a bit instead, aware they can be had cheap but this is worth a good few k to me still even with a few marks, it's in way better condition than many. I'm going to swap the carpet though which is stained from leaking brake fluid when the clutch master leaked, very annoying, but can't have it deteriorate too much, way too good. Just fitted more AO tyres I've always run, shame they stopped making the Bridgestone original RE040's I've kept using throughout, so have Turanza 005's, two more going on next week. A/C re-gassed as the car sat for over a year unused again, now will run it for a little while before it goes. Also just renewed the corroded fog lamps, swapped the radiator, need to do the PAS belt or A/C, one is starting to slip in cold weather occasionally, will probably do them all. Was looking around it again underneath, so solidly built, little rot really, destined to last a long time these particular cars I think.

so very nearly bought an RS2 in blue, cat C repair which was really nicely done, but I picked a couple of holes in the geometry and a wheel bearing, the guy addressed them quickly but longer distance involved, I went off the boil and didn't pursue it, my mate had one, it would have gone well with my 968 it borrows a couple of parts from. Should have got the blue one really, no doubt I'd still have it.

RS4 has been a thought for some time but don't want the fuel bill having run an A6 Quattro Sport before, very nice, but thirsty, and already have a guzzling 5.0 v8 haha.
1 - 20 of 22 Posts
Join the discussion
Continue with Facebook
Continue with Google
or sign up with email
About this Discussion
21 Replies
8 Participants
Last post:
CarsOrBikes 1 mo ago
MiniTorque.com
We’re a forum community dedicated to the MINI Cooper, Cooper S and Clubman. Come join the discussion on performance modifications, accessories, MINI news, maintenance and more!
Full Forum Listing
Explore Our Forums
The Projects MINI Parts For Sale MINI Chat The Projects Engine & Drivetrain
Recommended Communities