Joined 11 mo ago
·
7 Posts
Hello everyone and thanks for having me in the group.
I’ve recently got a 2006 Mini One D 88hp, and it seems lovely.
Last week when coming to UK from France, it drove impeccably for 350 miles, but for the last 50, which were very hilly, it changed from whizzing up massive hills in 6th at 130 km/h to slowing right down and struggling to get over them - felt like a fuel supply problem.
A few days later it drove fine again as we went to Manston for tests so that we can get back to France, but we were on B roads with no massive hills.
I ordered a fuel filter, and have just changed it. Took the engine cover off to find the hand pump to bleed the system (as per a youtube video), and it ain’t there! Whilst doing this, I discovered a sticker saying that the fuel fiter had indeed been changed already back in March 2020. Damn. So perhaps I’ll have to look elsewhere to solve the original problem.
My questions are - how do I bleed the fuel system? and where is the water separator for the fuel system (as I’d like to drain any water out of the fuel)?
Also I’d very much appreciate any ideas about the original problem… fuel pump perhaps?
Many thanks in advance,
Mark

Could be some dodgy fuel, the EGR valve playing up, fuel pump beginning to fail or the turbo beginning to pack up... probably in order of magnitude.

The engine is I believe a 1.4 D4D Toyota unit FWIW....sure this kind of issue does tend to point to the EGR valve or turbo......

Joined 11 mo ago
·
7 Posts
Thanks so much for your reply.
I changed the fuel filter (bled the system by turning ignition on and off a few times, and then cranking the engine); couldn't work out how to drain the water from system.
There are no warning lights (apart from the tyre pressure sensor and ASC lights which seem to be on most of the time), but the rev counter dropped to 0 and digital speedo blanked out on the journey back today, and around the same time the engine played up (after about 350 miles again). I stopped for a few mins, and it seemed ok on restarting.
I had put more expensive fuel in, and thought that that had cured it - I'll use supermarket fuel no more - but no, unless it was the remnants of crap fuel.
I'd like to think it was something like that, rather than the other things. The loss of power is more than turbo failure, it really is as though the engine is choking, so maybe fuel pump - would EGR playing up display the same symptoms?
Thanks again pipsyp!

Id probably buy a cheap(ish) Bluetooth ODB
2 dongle and use a smartphone app like Carista or TorquePro to run a scan on it, see if anything else comes up....or a proper BMW/Mini compatible scan tool as they dont tend to be very expensive. It might shed some light.

Trouble with modern(ish) diesels great as they are, they are pretty complicated so can be a bit of a sod when they do go wrong.

Joined 11 mo ago
·
7 Posts
Ahhhh... I wondered whether diagnostic tools had got within buying capacity of private (and poor!) motorists. I'll follow your suggestions.

That's so helpful. Thanks once again pipsyp!

Blimey, I've just spent an hour or two researching these, and it is the usual nightmare of reading 5 and 1 star reviews for the same products. Have you got a recommendation please?!

2005 R52 One Convertible (The Smoker)
Joined May 13, 2020
·
857 Posts
I just got a well reviewed ELM327 one on Amazon, TBH they are all much of a muchness from there (mostly chinese made). So long as the average review is good and its been reviewed well by quite a few people I shouldnt worry too much..... probably wouldnt spend more than 10/15 quid on one.

For a bit more money (50 quid) the Creator C310 gets pretty good reviews and can probably do a bit more..... 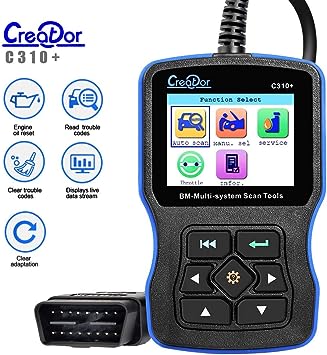 V welcome, no problem at all 👍

I'm writing with an update, and to thank you again.

I took the plunge and bought the Creator C310+ which showed me what you suspected - a faulty EGR valve.
I also bought some Wynn's EGR Cleaner spray, and followed the procedure given in this video to the letter.
I felt really disappointed when I went on the test drive. Power was significantly down. The engine wouldn't rev above 3,000 under load, or 4,000 with no load. I assumed the EGR cleaner had dislodged some crap which then stuck in a pipe somewhere, so I tried all sorts to clear it to no avail. THEN when I got back, I put the OBD scanner on again, no more EGR fault, but it told me that I had an air flow mass sensor fault, which I presume the car registered when I removed the air intake pipe and sprayed the cleaner in. I cleared the fault using the scanner, and immediately the engine could rev to 5,000. Went on a second test drive, and the car drove better than it has in my ownership - smooth acceleration, no hesitation and pulls like a train uphill.
Problem solved for around 60€. Brilliant!

You are a star. I am very grateful!

Well, I thought that that had cured it, but unfortunately not.
The problem came back, but only when the fuel tank was less than half full - it would go away again when the tank was full. So I guessed it was a weak fuel pump, and we have kept it well topped up since.
My wife has just set off on a long journey, and the Mini is doing it again, even with a full tank and so I fear I'm going to have to find some way of getting to her so that I can change the pump.
My question is, do you know how simple or otherwise the job is please?
Thanks once again for all your invaluable help...