Fast Road and a Bit of Track for £5k

Joined 1 mo ago
·
35 Posts
Mental to think though you could be losing 20-25kg on unsprung weight from wheels and tyres alone!

CharlieR53 said:
Absolutely, my S Spokes weighed in at 22kg a corner on RFs!
Click to expand...

Crazy that aint it.

Joined 1 mo ago
·
35 Posts
So some choices have been made and deliveries are starting on a regular basis! Going to be some major surgery in a few weeks.

Wheels: JR18's in Matt Bronze Wrapped in some PS4S
Exhaust: Had a bit of a result and found an entire Milltek System (Non Res, Manifold and 200 Cel Cat) second hand for £400 which I imagine is going to sound quite fruity and has freed up some budget
Suspension: Miester CRD Coilovers, Whiteline ARB and Rear Drop Links

Yidwann said:
Nice Rob! What Offset did you get? ET40?
Click to expand...

No, I went with ET35 (I think that is one of the reasons I went with the JR11s along with them being slightly wider at 7.25) as was worried about brake caliper clearance (chosen calipers are yet to be shown in my thread)

Joined 1 mo ago
·
35 Posts
So obligatory I’ve just given the car a proper wash photos! Didn’t manage to get it in the sunshine last time but what a colour Indi blue is, I love it.

Fitted the JCW Aero bumper and it’s on, needs a little bit of work to fit it up flush, but it’s going to be on and off so much in the next few weeks I’ll get to that!

And now the journey begins to Dechrome it!

Joined 1 mo ago
·
35 Posts
So lots of boxes of goodies are turning up now! Can’t wait to start getting some of this fitted up!

Not that I doubted it for a moment, but great service from Orranje. This is a proper box of goodies!

Coilovers are here too

And then my “Killing of the Chrome” continues. I’m always dubious about faux Carbon Fibre things but I think this looks really smart, and makes a world of difference to the look.


Just got to find a upper Aero Grille and sell my Gloss black ones on as they’ll look a little out of place now. Japan Racing are out of stock of JR18’s in Bronze too which is an arse, going to have to put new boots on the S Spokes tomorrow as I can’t wait any longer, I need to feel what it’s like on non hateful run flats first before anything else goes on! 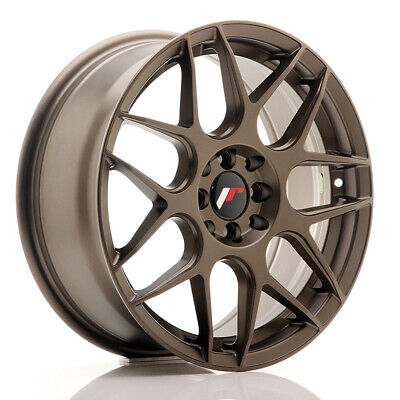 Want a custom PCD and offset?. No problem, JR wheels can be custom drilled so you can fit wheels to any car no matter how rare it is. ManufacturerJapan Racing. This does not affect your statutory rights.
www.ebay.co.uk
A bit more than the cheapest I have seen them but if you have your heart set on JR18’s....

Joined 1 mo ago
·
35 Posts
Good Spot Rob! Cheers! It’s a good chunk more but not ridiculous, I think that’s close to their actual retail just Wheelbase had an offer on them. They are currently finding out from JR how long the delay is.

Been out for a few drives yesterday and first thing this morning, just getting those final feelings of it being standard before things start happening. Going to be interesting to see the difference just decent rubber makes! Going to attempt to fit the stealth Air box and K&N this evening!

Difference with just decent rubber is night and day! Ride is so less crashy, if I had a pound though for every person at the garage who told me I'd selected the wrong size in 215/45/17 they would have paid for themselves too!

Want a custom PCD and offset?. No problem, JR wheels can be custom drilled so you can fit wheels to any car no matter how rare it is. ManufacturerJapan Racing. This does not affect your statutory rights.
www.ebay.co.uk
A bit more than the cheapest I have seen them but if you have your heart set on JR18’s....
Click to expand...

Damnit, they don't have them in stock either! Lead time is 6 months from JR for them to arrive! I feel like that's too long to wait!

Joined 1 mo ago
·
35 Posts
So bit of an update on some things that happened this week.

First up fitted a new stereo, thankfully I had watched a few YouTube videos first and this was relatively simple to do once I had seen how, I guess this is where people get their “f**kin Mini’s” vibe from though. Couldn’t just be the right tools down the side of the unit could it, taking half the center console apart to get that done, but its in and what a difference, the standard speakers are really quite punchy, some good sounds!

Then next up was fitting Orranje’s stealth airbox and K&N. I realised very quickly getting the silicone hose on the Throttlebody end was going to be a royal pain, I am sure more bits should have been taken off but I battled on and swore a lot and it took me two hours of dodging showers and back and fore! Makes a good difference to the sound, enhances the whine and I am all for that

I feel the hose is just a little too long and is pinching slightly as the air box needs to be encouraged into place before being screwed back down, so will have to revisit that for a little refinement, doesn’t seem to effect performance at all though, love it.

One the Wheels from we have made some progress, just a bit of a shout out to Casey at Wheelbase who was great in trying to sort out some other options when all the Japan Racing Stock went missing. But I have gone for some Bola FLB‘S in Gloss Gunmetal which I hadn’t noticed looking first. I think they look great, 7.6kg a wheel too which puts them on par with the Autec Clubsports.

Joined 2 mo ago
·
20 Posts
Great thread and great progress so far. Your box of goodies to go on really is awesome. You don't mess around.
21 - 40 of 43 Posts
Join the discussion
Continue with Facebook
Continue with Google
or sign up with email
About this Discussion
42 Replies
15 Participants
Last post:
big jim 2 h ago
MiniTorque.com
We’re a forum community dedicated to the MINI Cooper, Cooper S and Clubman. Come join the discussion on performance modifications, accessories, MINI news, maintenance and more!
Full Forum Listing
Explore Our Forums
The Projects MINI Parts For Sale MINI Chat The Projects Engine & Drivetrain
Recommended Communities