Not sure quite how to go about things at the moment, it’s MOTd until the 16th December and i know it’s going to fail on the DPF being tampered with, so do I get work done beforehand (and whatever the scraping is) or get it in for its MOT sometime after the 18th November (earliest time I can get it done) which is only 5 weeks away and see exactly what’s needed to get it through the mot so I’ve not wasted any time or money if it needs a load of non obvious work doing and it’s not worth repairing

To be honest other than the DPF and most likely emissions I don’t think it’s in too bad a condition in general with it having had a load of work done by the previous owner prior to me buying it, it’s the emissions that are bothering me as I don’t know if the DPF has been mapped out, even if the existing DPF is complete inside and if the new one goes on will it need remapping to put a working one back on, it’s a bit of a grey area really as I don’t know the condition of the existing DPF

2006 cooper S 221bhp
Joined Jul 28, 2019
·
868 Posts
Not very happy, my lad went to the dentist the other side of town on his bike and had an issue so got my wife to come out and collect him, he put the bike in the roof carrier but took the front wheel off and rested the forks on the roof!

So now I have a nice long scratch across the roof and 2 dents where the forks were resting on the roof as he pulled down on the bike to get it secure, thankfully I FaceTimed him to check what he was doing so they never set off with it like that other wise it would have been a lot worse!

I’ll have to get some touch up paint on it at some point, I know it’s only my cheapy commute car but I’m not happy 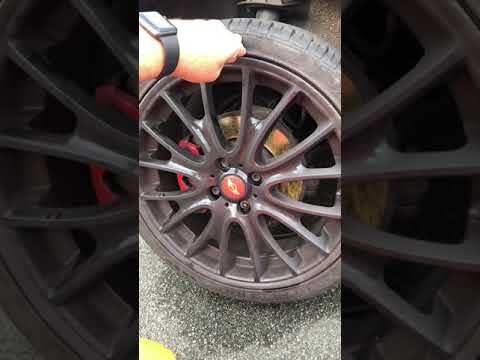 Unfortunately so is the Touareg (broken spring, track rod end and flat tyre, mot failure) and my electric bike is also knackered (motor gone) and my wife is going to the caravan on Friday so she may have to take the red car which she hates driving if the Touareg doesn’t come back this week as won’t be able to get this done by then

Joined Aug 22, 2019
·
940 Posts
Had that happen on my Mk5 Golf before, Wife came to pick me up from London (1hr drive each way), started making a racket halfway in and she kept going rather than stopping 😂

Somehow got us home though.

2006 cooper S 221bhp
Joined Jul 28, 2019
·
868 Posts
I was going to take it over to carsorbikes this morning after he kindly said he would have a look at it for me at very short notice but I called in the local garage on my way home from work this morning and the Touareg will be ready this week so my wife can use the red car until it’s back

I’ve parked this one up now until mid November when I can get it in for the MOT and see whats needed to get it through, hopefully not a lot or it’s strip the bits off, return to standard and sell on as spares or repair, I’m hoping it won’t come to that, emissions is my main concern rather than mechanics

2006 cooper S 221bhp
Joined Jul 28, 2019
·
868 Posts
I’ve spotted an R56 petrol Cooper (not an S) i quite like the look of for decent money so I’m going to get this car in for its MOT early to see what the damage is going to be cost wise to get it through, hopefully get it in the end of next week if I can then make a decision on the way forward

ideally I’m hoping it’s a cheap fix, just the front hub and DPF but if it looks like there is more than I thought I may go for the petrol one (if it doesn’t sell by then) and take the bits off this one like the wheels, rear lights, G-wing, black detailing etc even the 1/2 leather and transfer them over

Watch this space as they say

the one I’ve spotted is yellow like tweedbeans with a full factory JCW kit, would like nice with all the black bits off this one on it, I suspect it will sell quickly though, if I had the money to hand I’d have probably bought it by now to be honest!
101 - 109 of 109 Posts
Join the discussion
Continue with Facebook
Continue with Google
or sign up with email
About this Discussion
108 Replies
11 Participants
Last post:
big jim 4 d ago
MiniTorque.com
We’re a forum community dedicated to the MINI Cooper, Cooper S and Clubman. Come join the discussion on performance modifications, accessories, MINI news, maintenance and more!
Full Forum Listing
Explore Our Forums
The Projects MINI Parts For Sale MINI Chat The Projects Engine & Drivetrain
Recommended Communities